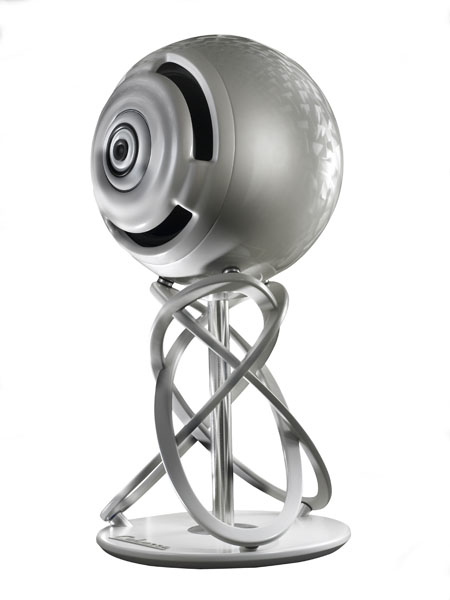 Pioneer of multi-amping and active filters since the late 50s when they introduced 3-way loudspeaker systems with built-in valve amplifiers and filters, Cabasse have always been offering to audio enthusiasts and audio professionals legendary reference active systems, including the Galion 3VTA for Radio-France studios in 1974 and the 7 versions of the flagship 4-way Albatros in the 80s and early 90s. Although very innovative thanks to the technologies involved in the membrane structures (rigid dome tweeters, honeycomb dome woofers), their active filters and double -(speed and acceleration) servo-control of woofers and low-midrange units, the lay-out of the drivers was nearly commonly vertically aligned on the front of a rectangular cabinet.

The first co-axial unit ever produced by Cabasse was the Diphone, deigned in the early 50s by Georges Cabasse to supply movie theatres going multi-channel when Cinemascope was launched in Europe. This solution consisting of a tweeter in the heart of a concave membrane acting like a moving horn was quickly dropped, the benefits from the co-axial lay-out being overbalanced by numerous directivity and coloration problems. It took the Cabasse R&D team 40 years and several major innovations to propose applications in which the principle of coincident drivers means true technological and musical improvements:

1993: First public presentation of the Atlantis in Germany : first active 4-way reference system fitted with the 8” 3-way coaxial driver TC21. This revolutionary system was first for Cabasse a standard and tool to develop the concept of the Spatially Coherent Systems. From it’s first public launch it became and still is an international reference for amateurs and professionals.

2006: introduction in Las Vegas of La Sphere, a system resulting from a long term ambitious project: the creation of a true 4-way co-axial point source with no mechanical compromise, driven by a specific digital signal processing, able to outshine the Atlantis.

To create this acoustical Graal, we first had to design and validate 2 hi-end subsets, the TC23 and the 55ND46.

Because they form a portion of pulsating sphere, the 3 co-axial transducers from the TC23 present a constant directivity index, as the smaller membranes are not affected directivity wise by the larger ones.

To obtain such a result without compromising on the linearity, efficiency and power handling parameters of each way, our engineers have been using all their know-how and experience in the exclusive use of hi-end technologies like the in house die-casting of Rohacell foam or the most powerful rare earth magnets available. Fitted in a lens made off a sandwich of composite materials with high damping capacities, the TC23 takes over the 80 Hz to 22 000 Hz bandwidth.

This 3rd generation of 8″ co-axial 3-way unit is fitted with a brand new tweeter including an exclusive diaphragm made off a new generation of expensive polyether. The production of these membranes is carried out by computerised machines created by our team. The process is automatic but very slow, preventing any alteration of the characteristics of the material involved and insuring accurate and alike parameters for every item produced. Rigid, light and damped, this diaphragm brings a perfect linearity of the response curve up to 25,000 Hz, with an excellent power handling and reliability over time.

This new membrane material was also selected for it’s excellent rigidity/weight ratio and the perfect mechanical homogeneity with the ring membrane of the midrange unit. Fitted with a Duocell diaphragm made of Rohacell foam, the low-midrange transducer has been redesigned with an extended stroke and reinforced power handling.

To achieve linear reproduction down to 20 Hz und under, our engineers created a special version of the 22″ unit 55ND46 designed for the Saturn 55 reference subwoofer. The basket of the woofer is designed to fit a spherical enclosure and the moving elements to work in a closed volume. Thanks to the extra rigid but light Nomex honeycomb dome structure of the membrane, the long stroke powerful magnet gap and the double spider, the combination provides high levels, speed and accelerations without the requirement of a huge loading enclosure. This is a key element because the sphere behind the 3-way co-axial TC23 has to be of a decent size not to interfere on the quality and directivity of the upper frequencies while applying the Spatially Coherent Source principles.

The design of the lens holding the TC23 in front of the 22″ woofer on the very same axis to form a 4-way point source required very long theoretical and experimental studies including tests of several versions and numerous filter modules. The shape concurs in creating a portion of pulsating sphere with minimum diffraction effects. The shape of the arms and of the front panel of the lens participate to the quality of the high and mid frequencies when the shape and the damping of it’s back side have been designed for the low-midrange specifications.

The spherical shape of the cabinet loading the woofer presents numerous advantages like:
rigidity inherent to the shape: this is essential to avoid any low frequency vibration that might create noises or a fuzzy sound scene. Thanks to the resulting extremely good pressure resistance, the shape allows to use a very small volume for a 22″ woofer and thus provide 96 dB efficiency and a linear response down to 20 Hz in anechoic room conditions. Any other reference system announcing equivalent characteristics in the low frequencies range needs minimum 4 to 6 times more volume for the woofer(s).
no standing waves. There are no parallel surfaces, so it is not necessary to fill the enclosure with a lot of damping material and internal bracing. The use of those items reduces the internal volume of air available to load the driver, thus requires the use of a larger volume, thus lager panels that require more bracing and damping…
perfect symmetry in every direction and no diffraction effects from 20 to 20 000 Hz: the very essence of the spatial coherency.

There is anyway a hitch when considering a full range spherical loudspeaker enclosure. A problem that required a long term collaboration with a French designer, famous for his variations around spheres and circles, to answer the following question: which type of stand will be able to position the tweeter from La Sphère at the optimal height, ensure a no compromise stability of the system even at very high low frequency sound levels and will not create diffractions spoiling the response coherency out of axis?

Looking at La Sphere, the answer looks obvious, and even beautiful. However, the impressive amount of drawings, plans, models and prototypes denies that first impression. The purity of the design masks the asymmetry of the shape avoiding diffractions, the choice of materials for rigidity ( die casted aluminium for the stand) and damping ( loaded composite for the bottom plate, combination of aluminium and elastomer for the silent blocks and the cones). For a full coherency of the system, the hull of the enclosure is a sandwich structure in which 2 layers of composite are damped by a special material initially designed to meet the vibrations damping requirements of air and space machines like Airbus, Ariane, helicopters and jet fighters.

This hull is straightened with curved wood bracings and internally covered with a thick layer of acoustical felt. Finally, the enclosure is tensed through compression when the QC55 is tightened from the back.

For this system, Cabasse designed a specific filtering module and digital sound processing software. Thanks to digital delays, the 4 acoustical centres are not only on the same axis but on one point, the cross-over areas are optimised with variable slopes up to 70 dB par octave. The result is a steady 60° diffusion cone with a full coherency at the listening spots between direct and reflected sounds.

Such a digital processing was possible only with the recent launch of hardware powerful enough to provide a better sound than the one of the analogue active filters which have been a Cabasse speciality for decades. 3 years of a team of 8 people have been devoted to the theoretical development of the filter module, it’s software and the associated measurement protocol. Then the final settings have been done through a lot of listening tests and measurements in different rooms with in between anechoic rooms measurements and hardware and software modifications. This meticulous process with a lot of experiments led not only to software upgrades, but also for instance to reconsider the design of the lens of the TC23 with modifications of it’s global shape, depth and width, new damping material on the side, additional waves on the front side to break diffraction effects, new shaping arms of the arms holding the lens.

This mastery in digital sound processing, shared and developed by Cabasse with researchers and students of the Ecole Nationale des Télécommunications de Bretagne (engineering school and international research centre in the field of information technologies) turns the one and only 4-way co-axial loudspeaker into a true point source:
one acoustic centre
an optimum impulse response with no noticeable variation in a 60° cone
an absolute linear phase even when the parametric equalizers are being used for room adaptation.
The spatial coherency is perfect.

A POWERFUL BUT COHERENT AMPLIFICATION

The monoblock amplifiers of the La Sphère system have also been designed after innovative technologies offering power and refinement in a very discrete size. The „Ice Power” modules present a 90% efficiency, 10 times more than conventional amplifiers. Driven by a 1000 W RMS amplifier, the 22″ woofer of La Sphère can be played up to it’s mechanical limits with no amplifier distortion. The same 1000 W monoblock is used for the low-midrange, when 300 W versions feed the midrange and tweeter units. Both versions share the same design and there is no risk of delay between the amplifiers that would kill the linear phase of the digital processing. The use for the 3 upper frequency ranges of amplifiers far under their nominal power ( never more than 5% for the high frequencies for instance) allow to avoid the risk of amplifier’s distortion.

LA SPHERE, THE SMALLEST OF THE GREAT SYSTEMS

All the acoustical laws have been taken into account I the development of La Sphere. No fundamental parameter has been sacrificed in favour of a technical or marketing option. Any bit of a compromise regarding any acoustical law is the result of a global optimisation regarding the fundaments. La Sphère offers unrivalled technical and musical specifications in a compacter volume than all other ultimate systems. It’s placement can thus be optimised with limited space or esthetical intrusion, in a recording studio or in a living room. Thanks to the co-axial technology and the application of the SCS principles, the sweet spot is very wide whatever the listening distance.